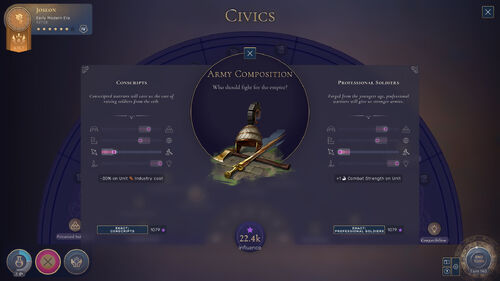 Civics represent societal matters on which the player can position the Empire by making a choice between propositions, and thus forging the Empire's character and ideology. The game context and the Empire actions will sometimes line up and unlock the conditions for a new civic. Each civic has two options to choose from. Both choices correspond to a possible answer to the question raised by the civic. Either choice will modify the Empire ideologies and have gameplay effects or unlock content. Empires can only enact one of the choices by spending

Civics may be enacted for an

Influence cost. This cost will increase as more civics are enacted and as later Eras are reached. In addition, enacted civics may be revoked for an additional

Both these costs are further modified by a number of technologies and tenets.

These reductions are additive, but the max reduction is capped at 99%.

A Civic Osmosis can happen if a City fall into the influence of another Empire, and the foreign Empire picked a different choice on a given Civic. The Empire can either adopt the suggested civic for free, or refuse.

Civics are arranged in a total of 7 different categories. These are (from left to right on the in-game Civic table):

6 Justice Civics, Civics related to the treatment of criminals and other civil issues.

7 Government Civics, Civics related to the organization of your ministry and politics.

4 Society Civics, Civics related to day-to-day life in your Empire.

6 Religion Civics, Civics related to beliefs and what is acceptable or not.

Among the Civics, there is a special type of Civics that are marked by a small globe symbol (🌐) before unlocked. There are Civics that have a diplomatic effect; refusing such Civics in an Osmosis event will create a special Grievance for the influencing foreign Empire, deteriorate the relationship between the two Empires.