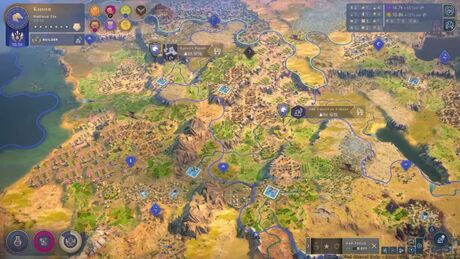 The world map in Humankind has terrain in different elevations which has a strong impact on view distance, battles, and sieges. The map is split into multiple Territories. Multiple Natural Wonders can be found across the map.

Terrain determines what yields a tile will naturally have. This is represented by tile types.

Tiles has other basic elements like elevation, which impacts Unit

line of sight, and

The map is split into Territories. Territories are a grouping of tiles where a player is able to build a Settlement. Multiple Territories can be linked to a City, but there can not be multiple Cities in a Territory.

Each Territory also has a biome. Biomes effect the type of resources available in a Territory and the appearance of terrain.

Curiosities are collectible resources that are randomly generated on the map. A Curiosity may be collected via moving a Unit into its tile.

Natural Wonders are found across the map. Claiming the Territory they are located in will provide

Land Percentage
Percent of the surface area of the game map that is land. (10%-100%)

Number of Continents
The number of continents, along with the World Shape parameter, determines the layout of the land masses for the game. (1-8)

New World
Enables the presence of a distant continent devoid of any Empire at the start of a game. Not available when the "1 Continent" or "Pangea" world option is selected.

Islands Odds
This determines whether or not islands will be present in the game (the chances that islands are generated, and how many are present).

World Wrap
This determines if the world map is continuous. (east–west axis)

Hemispheres
This determines the relative warmth of the "poles" of the map.

Continent Spread
This determines the relative distance between the continents on the map. (Regular or Chaotic)

Continent Form
This determines the shape and look of the continents. (Regular or Chaotic)

Lake Odds
This determines whether or not lakes will be present in the game (the chances that lakes are generated, and how many are present).

Lake Size
This determines how large lakes in the game map may be.

Rivers
This determines whether or not rivers will be present in the game (the chances that rivers are generated, and how many are present).

Elevation
This determines the extent of mountains and hills in the physical terrain.