Outposts are a settlement type in Humankind, which allows the player to claim a Territory or start a civilization and so on.

With an Army action, and for an

Influence cost you can set up an Outpost on an unclaimed Territory (one without any City or Outpost already on it). In the future this Outpost can become a City. Once an Outpost is founded by an Army, it takes several

turns to make it functional, based on the placement

Industry exploits. Once you've created an Outpost, the Territory where it is located is considered claimed and belongs to you. Other players may still enter the Territory, but no one else can claim it unless its Outpost is destroyed. You can destroy Outposts, even your own, by ransacking them with an Army (note that this will also destroy all trading routes passing through the territory).

The Outpost starts with an amount of

Industry invested towards its completion given by:

It is possible for a strong Army to found an Outpost that is instantly completed.

No cities (Neolithic or no cities founded):

Money cost of building an outpost is

Relocate and upgrade to City[]

If for some reason you are not satisfied with the position of your Outpost, you can relocate it somewhere else inside the Territory for

Influence. You can also develop it into a City after leaving the Neolithic Era, enabling resource gathering, infrastructure construction, and military production, but be aware that Cities cannot be relocated. In both cases, these operations take

Once an Outpost has been upgraded to a City, other players cannot enter its territory without declaring war or having an Open Borders agreement.

From an Outpost, Empires can exploit all the Resource Deposits in the Territory. All of the Resources exploited will benefit your Empire and can be traded with other Empires. Building Districts and Units in an Outpost costs

Influence. Cost (for Districts/Relocation) increases by with Time

(Relocating has a "production cost" of 35)

Gives the ability to attach one of your Outposts and its Territory to an adjacent City. Absorption costs

Influence, which increases with the Territory count of the City. Attaching an Outpost to a City cost the target City -20

The cost to attach an Outpost to a City is given by:

Once attached, the Outpost will turn into Administrative Center, which functions as a small Main Plaza.

Influence attach cost given above with with

An Administrative Center can be detached from its City to turn it back into an Outpost.

It stops contributing FIMS to the City. Completed Districts remain, Disctricts under construction are cancelled and don't retain progress. All population stays in the City, and Outpost population is set to 0.

Detaching an Administrative Center does not cost Influence.

You can update any Administrative Center to your current Culture with a cheap construction project.

Combat Strength in combat for Units adjacent to District on Outpost

Population consumption on City or Outpost

Population on City or Outpost

Industry on City or Outpost 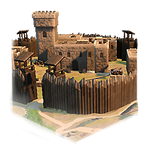 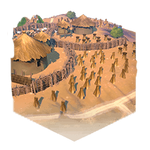 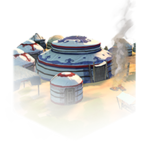 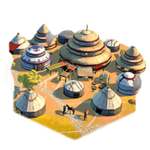